3 of the Most Common Reasons You Might Need an IV 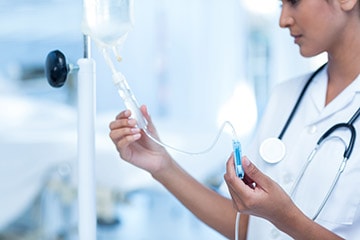 One of the most common forms of treatment offered at hospitals is intravenous (IV) administration. An IV administers a fluid or medication directly into the patient's bloodstream. Typically this is one of the first things the nurse will take care of once you have been admitted to the hospital. The fluid is contained in a small bag on a stand so it can drip down easily. It then travels down a tube, goes through a needle that is penetrating the skin, and makes its way directly into the bloodstream. An IV pump regulates the amount of fluid that comes out of the IV bag.

IVs are a critical asset to hospitals everywhere. There are two different kinds of IV pumps in use today: manually programmed pumps, and IV infusion pumps. That being said, more and more hospitals are also using smart IV pumps that regulate and monitor the amount of medication administered to the patient.

There are many different types of fluids that can be administered by an IV, and there are several different purposes for an IV delivery. The following are some of the most common reasons that a hospital patient may require an IV, according to Physicians Now, an urgent care facility based out of Rockville, Maryland.

IV fluids replace the fluids that are lost to the body due to sweating, vomiting, and frequent urination. Not maintaining enough fluid hinders wound healing, immunity, concentration and digestion. Physicians Now, reports that "these fluids often contain potassium, glucose, and sodium, which are electrolytes your body needs to function normally. "Saline, which contains 0.9% sodium chloride, is one of the most common IV fluids, used especially for dehydration.” Proactive Health Labs, a public, non-profit organization based out of Santa Monica, California, explains that IV’s give you a better chance of fighting whatever ailment you have. The added benefit is, because you might not be eating for quite some time, the hydration will hold you over until you can eat.

Pain medication is another common fluid that is delivered by IV. Delivering the medication this way helps it to reach the bloodstream much quicker, relieving the patient's pain much faster than taking a pill. However, because narcotic painkillers can be so powerful, and because they have a depressant effect on the nervous system, smart IV pumps can help provide critical safety measures by regulating the painkillers based on what each patient needs. According to Healthline, an expert consumer health information website, the rate and quantity of intravenous fluid given depends on your medical condition, body size, and age. Regulation ensures the correct amount of fluid drips down from the bag into your vein at the correct rate. Complications can result from receiving too much too quickly, or not enough slowly.

Last but not least, blood transfusions are a very common use of IVs. Thousands of patients a day are in need of blood transfusions following a traumatic injury. This can be due to a car crash, a severe cut, or any other extreme loss of blood.

If you find yourself in any of these situations, it's important to remember that hospitals are well equipped with IV pumps to help save your life. The administration of intravenous fluids via IV infusion is common and very safe. If you notice the IV flow going too fast or too slow, ask your nurse to check the flow rate.