A Brief History Of IV Infusion Therapy, From The Middle Ages To Today 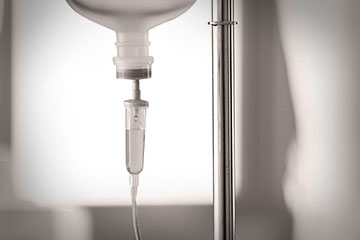 Although intravenous therapy is an extremely common sight in hospitals and healthcare facilities across the nation, most of us don't give a lot of thought into the history of the IV. While IV infusion therapy is relatively new, the concept behind it can be traced back centuries. In today's post, we'll take a brief look at the history of IV infusion therapy and how we've arrived where we are today.

IV infusion pumps themselves aren't a Medieval invention, but the idea behind these kinds of treatments emerged during the Middle Ages. At the time, experiments were done in an effort to transfuse blood between humans and animals. Poor results (plus an official decree from the Vatican) eventually put a stop to these experiments. There were some instances of human-to-human transfusions during this time period as well, but they were not very successful.

Sir Christopher Wren created the first successful infusion device during his lifetime (1632-1723). The device, made from a pig's bladder and a writing quill, wasn't very durable -- but it worked. It allowed him to pump outside substances into the bloodstream of a dog. (Fun fact: Wren also made improvements to the microscope.) Although the device he created was a challenge to secure, it did pave the way for future creations, like the IV pumps we use today.

Modern medicine has really come a long way in a short time. It really wasn't until the early-to-mid-1800s that injections and transfusions started to be readily used to improve patient health. During the 1930s, Dr. Thomas Latta found that salt water, injected into the bloodstream, could help fight cholera. A couple of years later, Dr. James Blundell used transfusions during postpartum hemorrhages and observed that the speed of infusion had a direct impact on its success. Blundell later created a device that monitored an infusion's speed of flow.

During the early part of the century, IV infusions were housed in an open container which was covered with gauze in an effort to prevent contamination. It was a method that was mostly effective, but it didn't always work. In the 1930s, infusions were kept in a vacuum-sealed glass bottle. A couple of decades later, IVs switched over to the plastic bag we use today. Interestingly, it wasn't until the 1940s that a nurse was allowed to administer IV therapy (until that time, only doctors were permitted to do so). These days, nurses are the ones who typically handle IV therapy for patients.

In the 1960s, IV infusion pumps became a ubiquitous sight in hospitals all across the country. This was also during the time when Dr. John Myers started injecting patients with what he called a “cocktail” of vitamins and minerals. His exact formula was lost upon his death in the 1980s, but experts came up with a modified version that's pretty close. The cocktail includes vitamins B and C, magnesium sulphate, calcium gluconate, and selenium to manage conditions ranging from allergies and asthma, to heart disease and fibromyalgia. This showed that IV therapy isn't just for blood transfusions; it can help patients receive valuable nutrients, too.

As medical professionals and patients will know, IV therapy is a regular part of healthcare in the modern age. No longer a controversial treatment, it's used on an everyday basis for countless people all across the nation. It's used to both improve and save lives in numerous ways. But even though it's widely accepted, it's always being improved upon. Smart infusion pumps, for example, help to improve patient control while not compromising on quality. Although those early experiments may not have seemed like milestones, they were truly the building blocks of treatments on which we rely today.