Technology: Is It The Future Of Healthcare? 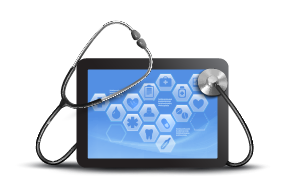 In the mid 1800s, there was a new technological advancement introduced that was perceived to have little staying power. But alas, it is still in use today at not only doctors’ offices, but by nurses, nurse practioners, and physician assistants. Surely it, like most technology, has undergone many updates and upgrades, but to spite the skepticism, it not only had staying power, it became probably one of the most recognizable devices used in medicine. It is the stethoscope.

Technology in general has aided many industries and professions, but when you look at medical technology by itself, there is little doubt to the contributions it has made to the care of patients worldwide.

Today we have vaccines that are developed to eradicate or at least control and manage the spread of diseases that formerly wreaked havoc on whole populations.

We have imaging and infusion technologies that are able to detect early signs of disease development as well as aid the clinicians in delivering the right drug at the right dose and time to the right patient. We have implantable devices to regulate heartbeat, Parkinson’s shakes and so much more. And in today’s wired world, telemedicine is redefining many procedures associated with patient care.

According to Wikipedia medical technology can be defined as:
“Any invention that may be used for safe and effective prevention, diagnosis, treatment and rehabilitation of illness and disease. Generally this would include devices, pharmaceuticals and procedures as well as organizational structures used in healthcare settings.” 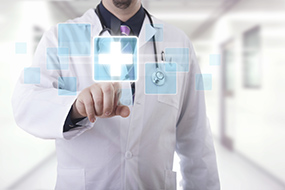 But will technology simply compliment or replace the human touches in healthcare? There are some who believe that remote care via telemedicine will achieve that goal to a large degree. Others think that technology is a set of tools designed to aid in the task of patient care and wellness.

Many years ago, my Mom, who was a registered nurse, had a discussion on this topic that has stayed with me for years. My career has centered on helping healthcare providers and suppliers provide medical devices that help both patients and clinicians alike. Her story went something like this: Three physicians were discussing the use of computers in the hospital and what a vast improvement they were expecting. Yes it would be expensive, but the value was unquestionable. Mom, not being one to hold back her opinion piped in and said, and I quote, “I’d like to see a computer put a patient on a bedpan!” A hearty round of laughter followed. I think that statement is still true today. And frankly, I hope I never personally need to know if computer aided bed pans have arrived.

I am excited about medical technology’s contribution, I do not think it is the costs driver of our healthcare system, and I agree with the group of physicians, it may be expensive, but the results and benefits are undeniable. Is it the future for healthcare? It certainly must be a key contributor to that future.