Ultrasound and Its Surprising Uses

When you read the word, “ultrasound,” most minds will jump straight to one thing: Babies. Everyone has seen dozens of TV shows and movies showing that moment where the expecting mother sees her baby on the monitor for the first time. Countless more have experienced that joy in real life. Ultrasound technology is one of the more versatile and useful technologies in the medical profession. Apart from just prenatal imaging, ultrasound is often used in muscle healing and in treating soft tissue damage. Ultrasound technology has advanced far enough in recent years that it has been used as a diagnostic tool in regular family clinics and is expected to replace stethoscopes in the coming years for standard checkup use.

So What is Ultrasound?

For those who aren’t overly familiar with ultrasound technology, it is an imaging technique that uses extremely high frequency sound waves and echoes to form a visual image. If this reminded you of bats using echolocation or submarines using sonar, you’re on the right track. Sonar works by bouncing, or “pinging,” a sound wave off of nearby objects and using the echoes to make a map of the surrounding area. Now multiply a sonar ping by a million (yes, literally a million), and that’s basically ultrasound. Using millions of high frequency sound pulses each second, high definition images are compiled from the echoes to get a comprehensive look at what’s going on inside your body.

While ultrasound technology is most commonly associated with medical procedures, the applications of ultrasound extend from beyond the hospitals into the depths of space, literally. In recent years, scientists from around the world have been exploring and applying amazing new uses for ultrasound technology. Check out the following uses to learn about new ways we’ll be using this technology in our everyday lives.

While this is still a medical application, it deserves its own mention. In recent years, 3D printing has evolved from an interesting concept into real-life use, with no end in sight. In this specific instance, medical professionals have developed a new form of casting that utilizes 3D printing. It prints a skeletal web that hold the bones in place, rather than wrapping the limb in layers of plaster. This enables the skin to still be cleaned, drastically reducing the rather disgusting side-effects of wearing a cast. 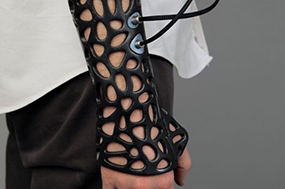 Designer Deniz Karashin thought of an even greater idea that combines the effectiveness of 3D printed casts and ultrasound technology. What is being called the Osteoid Cast, this new design enables ultrasound probes to be inserted into the cast and for low intensity pulse ultrasound (LIPUS) to help accelerate bone growth. Although the research is still a bit vague, there have been correlations found between LIPUS waves and improved calcium ion growth, theoretically speeding up the process of bone healing. As this technology becomes more refined and effective, it would not be surprising to see this technique become more common in the health industry.

Using a cane for guidance has been a staple in the blind community for a long, long time. It’s simple and effective. However, using a cane has some rather glaring weaknesses. Anything above the waist is tricky to feel coming, and anything hanging at head level is completely missed. Wanting to solve this problem, Professor Meenakshi Balakrishnan has invented a new technology for this age old method. Going with the name SmartCane,™ this new technology uses ultrasound to give the user a far more accurate picture of what obstacles are near them. The scanner sends out waves at a 45 degree angle above the knee, and communicates what it finds via vibration through the handle of the cane. If the vibration is on the right side of the cane, the obstacle is on the right, and the user knows to step left to avoid the problem. It’s a simple interface that’s extremely effective.

While it is hoped that one day this will be the standard for all blind populations, the initial focus is in India, where blindness is considered a national health concern. Additionally, navigating the over-populated areas throughout India is difficult for everyone and almost impossible for those who are visually impaired. SmartCane™ is hoping to improve the standard of living for the millions of visually impaired citizens who still have so much to offer society. With the goal to partner with local hospitals, governments, and NGOs (non-government organizations), SmartCane™ hopes to use their cooperation to bring this technology to standard production as soon as possible.

Using Ultrasound to Find the Age of Younger Stars

In the world of astronomy, timelines can extend for billions of years. There are all sorts of methods used to determine the age of a star, planet, or galaxy. Recently, however, a new method has come out to find the ages of new stars, something that has previously eluded the science community.

For a quick lesson, stars are considered “born” when they become visible to the naked eye. As they begin to age, the effect of their own gravity causes them to shrink in size. The shrinking causes the core of the stars to heat up to the point of being able to begin hydrogen fusion, converting hydrogen gas into helium. When this occurs, the star has left its youthful phase and stabilizes for the long haul. This phase is called main sequence, or MS. 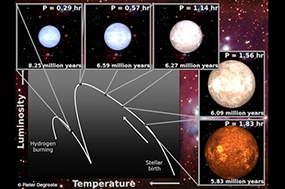 Up until recently, monitoring the pulses of stars has only begun when the star is already to the point of nuclear fusion. Headed up by Konstanze Zwintz, a research team from Belgium compiled data from Canadian and European satellites to study the pulses of stars that are younger than 10 million years. In space time, that’s brand new. The researchers found that just as with ultrasound and embryos, new stars have specific internal pulses that older stars do not. As the stars begin to age, the stars vibrate faster and faster as they reach the MS phase. By comparing the vibration speeds of new star clusters, they have been able to identify the relative ages of the newborn stars, something that has never been done before.

Everyone has had that moment of dread when they look down at their phone and see the battery at 1%. Sometimes we bring phone chargers with us just to get full use through the day. While cell phones are becoming more innovative with every passing year, keeping the battery charged is continually an annoyance that we all face. A company named uBeam is working on a new method to solve that problem. Wireless charging has been a dream since batteries became common, and while the technology is there, it’s never been especially reliable.

uBeam is currently developing a method of wireless charging using ultrasound waves as the energy carrier. The process converts electricity into sound waves that are sent out through ultrasound, then converted back into electricity when the signal is received. 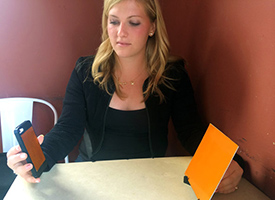 The goal of this technology is to enable mobile freedom akin to WiFi. The signal will broadcast to fill a room, so that as long as your device is within range, it can receive charge. Previous wireless methods are technically without wires, but the device has to be placed on something, essentially having the same mobility issue that standard charging faces.

As this technology advances, the need for large batteries, universal charging cables, and access to outlets will decrease. The larger the broadcast range, the more constant the charge will remain, so batteries can become smaller, allowing greater freedom for changes in phone design. uBeam expects this technology to start appearing in stores within the next 2 years. While there are still some limitations to the tech, they are paving the way for an entirely new way to power mobile electronics.

Creating Haptics to See and Touch

A group of scientists at Bristol University have discovered a completely new application for ultrasound technology. By using a setup of focused ultrasounds, they have created mid-air shapes that you can literally see and touch. The ultrasound waves create a haptic effect that you can feel when you pass your hand through it. These waves can be used to make all sorts of shapes and patterns.

By combining the ultrasound with a 3D display, the image can be both seen and felt. The potential applications of this newly discovered technology are enormous. New interactive displays can be developed that operate by hand gestures, which opens the door for new interfaces for your car, video games, and other forms of entertainment. As new methods of light and display technologies advance, the pairing of this haptic feedback system has the potential to expand how we view information forever.

The rise of quadcopters and “drones” has created a new world for how the average filmmaker has been able to accomplish their craft. However, anyone who has attempted to fly a drone will tell you that it looks a lot easier than it actually is. Knowing this, drone companies have been constantly inventing new ways for “autonomous flight” for drones, enabling the user to focus on the camera work and less on the flying. These flights are a combination of gps, altimeters, and pre-programmed flight paths. Well, the new eXom drone takes the game one step further. 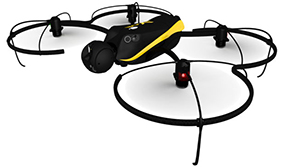 The eXon uses a new ultrasound-based operating system that enables entirely autonomous flight. Not pre-programed or with automatic stabilization, but fully self-flying. It accomplishes this by using both a downward facing camera and a ultrasound radar system that can map out any nearby hazards that will be avoided. It also has the added feature of a thermal camera that can capture information otherwise not visible to the average camera. While the drone can still be flown manually, it has enabled the average user to fly worry-free and start creating those perspective-altering action shots.

Yet again, Dyson shows up with an original, stylish, and downright cool way to vacuum your carpet. Constantly setting the bar of vacuum innovation, Dyson has developed the latest, and arguably the most impressive, vacuum yet. 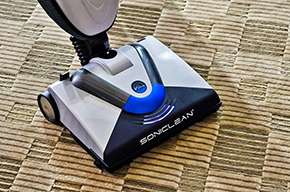 What has been dubbed the Soniclean, this new vacuum has a myriad of new features that maximize the speed and quality of the vacuuming process. This vacuum is lightweight, just over 10 lbs, with a new motor that increases airflow by 30% while still keeping the total amount of electricity consumed. A rather odd feature that this vacuum offers is a new fragrance dispenser. While this seems a bit weird, it actually makes a lot of sense when you think of it. This vacuum not only cleans, but it leaves the room smelling fresh and inviting.

The greatest feature on this vacuum is the new patented “sonic bar” that is placed just behind the roller of the vacuum. This bar emits high frequency ultrasound waves that shakes loose the dirt and grime that has been pushed deep down into the carpet, creating a deeper clean that other vacuums can only hope to offer. Dyson utilizes ultrasound waves to create a new, stylish, and extremely effective way to clean your home carpet.