Med One to One JAN / FEB / MAR TWENTY SEVENTEEN ISSUE 51

Medical Records on the Blockchain...

But first...what is a "Blockchain?" 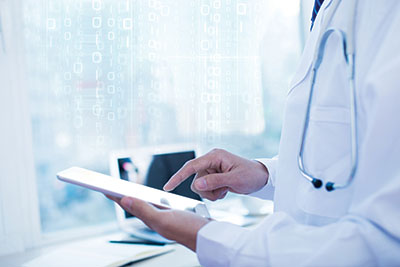 It's interesting, how evolving technology re-emerges with new uses over time. In March of 2014, I wrote an article about Cryptocurrencies, and the rise of Bitcoin and what they were. Cryptocurrencies are still going strong a few years later. They show no sign of disappearing.

What is interesting, is that the technology behind these currencies, is being used in new ways. Bitcoin introduced us to the “Blockchain,” which in simple terms, there is one shared ledger, but it’s spread across a network of synchronized, replicated databases visible to anyone with access. This gives it unprecedented security benefits. Hacking one block in the chain is impossible without simultaneously hacking every other block in the chain’s chronology.

Every time a digital transaction takes place, the blockchain code groups it into an encrypted block with other transactions happening at the same time. For Bitcoin, this would be moving the currency to other wallets. For Electronic Health Records, it might be all the things that happen to you on a doctor’s visit (blood work, a new prescription, maybe some x-rays). A physician or pharmacist trusted with an access key would validate the transaction. Then the software timestamps each validated block and adds it to a chain of older blocks, in chronological order. The sequence shows every transaction made in the history of that ledger, results of blood work, or a knee replacement procedure. Get it? It’s a chain of blocks. Thus the name - Blockchain.

Now, in this standard public ledger, your raw medical records wouldn't be included in the actual blockchain data. What would be included are the provider, and the location. Only another trusted person can request the detailed information. By doing it this way, privacy continues to be in the forefront of the technology.

Some researchers at MIT Media Lab have created a blockchain pilot called MedRec. You can read about it here - viral.media.mit.edu/pub/medrec/release/1 - but so far in their pilot, they have found the results so positive, they hope to branch out to other clinics to continue their testing. The FDA also just announced that they are partnering with IBM Watson to explore blockchain technology.

We will see if this technology and way of verifying data publicly will take off in the medical space. We have seen it take off on the cryptocurrency world. I have no doubt, it is only a matter of time before we see it revolutionize the way we share our medical records.