Med One to One JUL / AUG / SEP TWENTY EIGHTEEN ISSUE 57 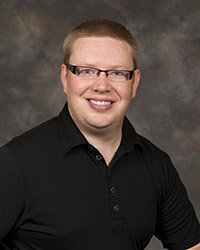 In October 2003 Med One was searching for some help with our computer needs. I was over the department and had a small team of individuals who were responsible for keeping Med One up and running. We were also out sourcing some of the work since there wasn’t quite enough work to keep another full-time employee busy. I remember when this young kid named Nate Davis came in to talk with me about the opportunity to work for Med One. He was so excited about computers and was ready and willing to do anything he could to work with them. I’ll never forget him saying he really didn’t need much pay, just an opportunity. Who could pass on that offer?

Within a few months of his hire date, Nate started to really make a difference. He was very knowledgeable and had many great ideas on how we could improve our computer infrastructure. Soon we were using our “outside” consultants a lot less and moving most of the work in-house. Nate had essentially replaced the person (his supervisor) who recommended I hire him. It was the beginning of a great relationship.

Over the years, Nate has played a crucial role in the development of the systems that we use at Med One. He basically took the foundation of the IT department that was given to him and built it into a strong department that is very beneficial to the company. His knowledge of computers and increasing knowledge of our business was a winning combination. Just a few short years after he started we were really starting to function like we should from an IT perspective. All of the critical things – backups, firewall security, IT policies and procedures, etc. were getting the attention they needed. Once the day to day usage issues were resolved and we had all of the systems running at a high level, Nate began to utilize his knowledge of the company and really started to implement systems and processes that improved our day to day work effort.

Nate never stopped learning and was always trying to understand the different areas of the organization and find ways to make our employees more effective and efficient. Let’s just say Nate made my job of managing him very easy. As the company continued to grow, our IT structure grew with it. Nate brought on additional employees with differing roles within the IT department. He built a great team whose work and effort have played an important role in the success of Med One.

Through his hard work, taking a little risk and a using a little luck, Nate has put himself in a position to fulfill his dream of starting his own business. I am happy to say (which sounds a little strange) that Nate’s last official day at Med One was August 17th. I love that he has put himself in this position and had the courage to take a chance. How could any manager be disappointed when an employee chooses to pursue a personal dream? Sure, it is going to be very difficult without him. He has had a huge impact in every aspect of the company and has gained an immense knowledge of the company – which is something you just can’t easily replace. We definitely won’t be able to replace all the things Nate was able to offer, but he is leaving us in a great position and we will be able to continue to build on the great foundation that he left.

I am grateful for Nate and for all of the things he has done. We have developed a strong professional relationship as well as a very strong personal relationship. While he may not be around every day, we will definitely be watching and following his journey in this new adventure. I am 100% confident he will be successful in his pursuit of owning his own business. I like to think that many of the skills he has developed and learned at Med One will play a critical role in his future success.

Best of luck to Nate and his family as the Med One chapter of their lives closes. And while you may no longer be a Med One employee, your Med One family will be cheering you on - wishing and hoping for your success in this new chapter of your life. Thanks for everything you have done for me, my family and Med One!

P.S. Visit www.coinbook.com for more info on Nate’s new adventure. If you are into Crypto currencies – he is the guy to see :)

P.S.S. I am pleased to say, we have hired a very capable individual to replace Nate and I am excited to see what the future holds for Med One and how he will leave his mark on the company. Randy Smith started the end of July and spent a couple of weeks working with Nate to learn the ins and outs of our structure. He has hit the ground running and is making great strides to keep us moving forward.