In high school, I joined my school’s crew team. At the time, it was a brand new club team with one dad and some local adults with rowing experience pitching in as coaches. Without extensive experience from anyone involved, our rag-tag team wasn’t winning any awards, but we had fun and ultimately did get to a competitive level.

Because we were a new team with new coaches and new rowers, we spent a lot of time going over the basics like balancing the boat, feathering our oars, and trying not to “catch a crab” – something that occurs when one’s timing is off, and the oar gets sucked into the water. Each rower also had to control how fast they slid their seat back and forth so as to not jerk the shell (boat). There are a lot of factors in play when rowing, and even more when you consider that each rower must be in sync with the rower in front of them and the team as a whole, which multiplies the possibilities to mess up. 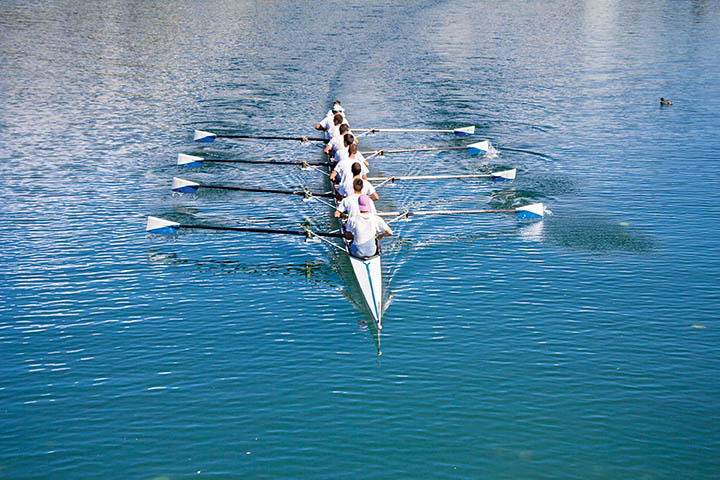 “Swing” is a term used in rowing to describe when all rowers are totally in sync. But there is more to it than just timing alone. Beyond moving oars in sync, each rower must also be pulling the same amount of water, sliding their seats at the same time with the same momentum, etc. Being in swing allows the shell to travel faster and much more smoothly. It’s something that only happens when all eight rowers are in perfect unison and is certainly not something to be expected of a beginner team. However, there was one team practice where my shell was in full swing. It was for a very brief period – maybe 30 seconds – but it taught each of us in that shell what rowing together should really feel like. At that point, our team had been together long enough that we were proficiently rowing with minimal issues. I thought we were becoming pretty good until I had experienced swing and realized there was a whole new level to what we could achieve.

ONE MAY BE EXCEPTIONAL AT ALL OF THE TECHNICAL ASPECTS OF THEIR JOB, BUT IF THEY AREN’T MOVING WITH THE TEAM, THE ENTIRE TEAM IS SLOWED DOWN, EXPERIENCES JERKINESS, AND IS INEFFICIENT.

Much like on a crew team, teams at work must also strive to achieve swing if they want to be successful. Pulling your weight, gaining experience, and knowing your part are all crucial factors in achieving swing, but swing will never happen if you aren’t paying attention to the rower in front of you. Perfect unison cannot be achieved without mirroring how and when the rower in front of you moves. A rower can execute the technical aspects of a stroke flawlessly but could be out of time with the rest of the rowers. Likewise, one may be exceptional at all of the technical aspects of their job, but if they aren’t moving with the team, the entire team is slowed down, experiences jerkiness, and is inefficient. To combat this, teams must be unified in strategy, method, and purpose.

In fostering an environment that encourages swing, do the following to set your team up for success.

Strategy: Play to each other’s strengths/weaknesses. Set each other up for success by assigning tasks to individuals who are best suited to tackle them. In rowing, each seat has different responsibilities, so rower placement in the shell is important.

Purpose: Move in the same direction. If your team does not have a clear end goal, it is likely that you will paddle in circles. Make sure everyone knows what the goal is and is motivated to achieve it.

Before I ever experienced swing, I thought my team was doing pretty well (all things considered). It’s easy to think that you’re doing fine if you don’t see anything going wrong in the moment – so don’t let complacency allow you to stagnate and thwart your potential. Actively work with your team to not just get by but to achieve full swing.