Med One Group Welcomes New Board Secretary to Board of Directors 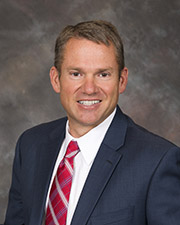 The Med One Group Board of Directors welcomes their newest Corporate Secretary Richard H. Madsen, II of the law firm Ray Quinney & Nebeker.

Med One Group, a medical equipment leasing and rental company headquartered in Sandy, Utah, established a Board of Directors at the end of 2015 to guide the future growth of the company. Comprised of prominent local business leaders, this board helps in the governance of the company as it continues to develop and expand. Richard H. Madsen, II has been appointed the Corporate Secretary of Med One Group’s Board of Directors, effective July 13, 2016.

Mr. Madsen is a Director and Shareholder in the Salt Lake City law firm of Ray Quinney & Nebeker P.C. and manages all of the firm’s associate attorneys. He has extensive experience in representing businesses in Utah and throughout the United States including banks, equipment finance and leasing companies, new motor vehicle dealerships, real estate developers and others in all aspects of their businesses. Mr. Madsen has been included on the list of The Best Lawyers in America in Banking and Finance Law. He has served as Med One’s corporate counsel for 12 years.

Med One has experienced significant growth within the last few years, and they expect to see further growth, as is seen in their decision to seek the help of the Board of Directors. In recent months Med One Group has created many new positions within their corporate office as well as within multiple distribution centers throughout the country.

The Board of Directors includes Med One President and CEO Larry R. Stevens, Med One Executive Vice President and Co-Owner Brent H. Allen, Robert C. Gross, Lane A. Summerhays, Randy C. Emery, Tricia L. Schumann, and William J. Brady. It has met several times over the past nine months, including at the Med One Group Annual Meeting in Park City, Utah, and during regular board meetings at their new corporate office. Med One welcomes its new Corporate Secretary and anticipates Mr. Madsen will bring great value and insight to his new responsibilities.