Med One to One OCT / NOV / DEC TWENTY SEVENTEEN ISSUE 54 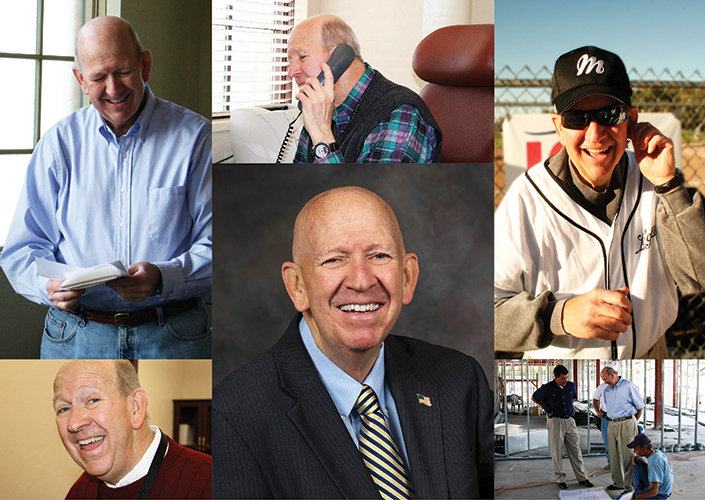 From Med One To One Issue 46

Shortly after I graduated from college and started my new life as a grown up with a job, one of my new work associates gave me some very sound advice. He said, “as you go throughout your career; watch, learn and implement.” As we continued our discussion he shared more of his “wisdom” stating, “you can spend a lot of money going to seminars or reading books from the guru’s who know everything, or you can take advantage of your greatest asset – co-workers.”

For me, one of these great assets was Mike Manning. Back in December of 2015 I wrote the following article about Mike who had just retired from Med One after 18 years of service. On October 12th, 2017 Mike passed away from natural causes. As I reflect on his life, the things I wrote in 2015 are still relevant today. Mike was a great influence on many, and his efforts still impact Med One today. The following includes parts of his obituary to give further insight into this great man’s life. Mike will be greatly missed by all who knew him.

As I look back on my “career beginnings”, I realize just how accurate that advice really was. I have watched my co-workers, learned from their success/failures, and tried to implement the positives into my own life. Along the way, I have also come up with a few ideas of my own. I have routinely seen those who have the most, put in the most. There have been many who felt they deserved the most, but didn’t want to do what it would take to get there.

Over the last 18 years, I have watched and learned from many at Med One. One of those coworkers who has taught me several valuable lessons is Mike Manning. He joined Med One in 1997 and brought a tremendous amount of experience. He was a seasoned veteran who knew the ropes and how to get things done. For the first part of his time at Med One, I was able to work very closely with him in supporting our dealer network and biomed efforts. From him I learned the importance of building real relationships. Even if a transaction didn’t happen, Mike always created a partnership.

Mike was always one of the first to arrive at work - I attribute that to his age, as it is a proven fact, old people always start their day way too early :) - and always one of the last to leave. He never cut corners and always looked for a solution that would be a win for the end user, vendor, and Med One. Mike was dependable and honest. If he said he would do something, he did it as promised.

Mike was instrumental in starting our Equipment Services division, hired and developed our first lease sales team, was appointed as our first Human Resources Director and manager of physical facilities. He even served several years as the head coach of The Mighty Med One Legends coed softball team. He taught me some very valuable lessons and has helped make Med One the company it is today. He was a great asset to Med One and we will miss having him here.

When someone you love becomes a memory, that memory becomes a treasure.

Our beloved husband, father, grandfather, great-grandfather, brother, uncle and friend, Michael Fredrick Manning, passed away peacefully at 73 due to natural causes. He was surrounded by his family at his home on October 12, 2017. After 51 years of marriage and adventures with "chicken" he is off to his next one. He was born February 4, 1944 to Joseph William and Mae Belle Gainsforth Manning in Lehi, Utah. Mike married his college sweetheart Colleen Madsen Manning in the Salt Lake Temple on June 22, 1966. They were blessed with two wonderful daughters, 6 grandchildren and 2 great grandchildren.

Mike graduated from Lehi High School and that very evening he left with friends to join the 1457th Engineers Battalion with the Utah National Guard. Mike had a deep love of this country and exemplified this by serving for 7 years. He attended college at Weber State and BYU where he remained a true blue cougar fan throughout his life. Mike worked for Distributors Inc., LDS Welfare Department, Big O Tires in Littleton, CO and Med One Capital in Sandy where he retired. He traveled extensively for each company even taking "chicken" to England, Hawaii, New York and etc. They enjoyed taking the entire family on vacations including a memorable trip to Palmrya, New York and Washington D.C.

Mike loved the Lord Jesus Christ and was a devoted member of the LDS Church. He served an LDS Mission to the South West British Mission and continued to be a missionary for the rest of his life.

Mike surprised his classmates and wife when he was called as Bishop of the Sandy 3rd Ward and later as Stake President of the Sandy Utah West Stake where he served for over 10 years. One of his greatest joys was being able to seal families together forever.

While living in Littleton, CO Mike and Colleen had the opportunity to serve in the Denver Temple Baptistry where youth came from all over the Midwest to do a special work for families. He also had the pleasure to serve many years as an Ordinance worker and Sealer in his beloved Jordan River Temple with his wife by his side. Mike was serving as Bishop when the Temple was announced and Stake President of the Sandy Utah West Stake when the Jordan River Temple was built and dedicated. This beautiful temple remains a very sacred and dear place to our family. Mike sought adventure in every turn. He loved to hunt and fish with family and friends. One of his favorite memories was of his once in a lifetime hunt for buffalo on Antelope Island with his two son-in-laws and friend. Many trips to Alaska, Mike still loved to fish in the beautiful mountains of Utah. He enjoyed being in the outdoors and observing the handiwork of God. He looked forward to spring, the budding of the trees and the changing of the fall colors of leaves and especially the smell of the cool clean mountain air.