A story I recently read described a biker The trucker in this story showed great self-restraint gang that went into a bar looking for in a moment of high tension and possible personal danger. trouble. Seated alone inside was a truck While, in this instance, the story ended in some retaliation, driver in the corner eating his dinner the ability to control and properly channel our mental quietly. One of the bikers walked over to the and emotional strength is something worth pondering trucker, picked up his plate of food, and dumped it on his head. He then poured his drink onto his lap. Amazingly, the trucker barely even flinched. Instead, he got up, paid his bill, and walked out. The Hell's Angel looked over to the bartender and said, "Not much of a man, is he?" To which the bartender said, "Not much of a truck driver either - he just ran over twelve choppers going out of our parking lot!"

The trucker in this story showed great self-restraint in a moment of high tension and possible personal danger. While, in this instance, the story ended in some retaliation, the ability to control and properly channel our mental and emotional strength is something worth pondering and working toward.

Historically, some of the most gentle people have not been weak but rather strong and influential. Choosing to have a soft heart in a hard world is strength rather than weakness. I think of people like George Washington, Gandhi, or Mother Teresa. Strong but gentle people possess the admirable quality of meekness.

"Historically, some of the most gentle people have not been weak but rather strong and influential. Choosing to have a soft heart in a hard world is strength rather than weakness."

Meekness is not often talked about and especially not in a business setting. Meek rhymes with weak, which might cause us to shy away from it. Nobody wants to be thought of as weak or timid! At work, there's often an expectation and a need to be strong, bold, confident, and assertive, so why in the world would we want to be more meek? A closer look at what meekness really is will clearly show that qualities associated with strength and assertiveness are not its opposite but instead are part of its core.

In modern terms, the word meek is defined as: humbly patient or quiet in nature.

If you dive into its origins though, it becomes clear that meekness is definitely NOT weakness. Rather, it is a special kind of strength.

While the origin of "meek" in English comes from the Old Norse: mjukr, meaning "gentle," a more clear understanding of its meaning comes from the Greek origin, praus, which is translated as: "strength under control."

In ancient Greece, war horses were trained to be meek — that is to say, strong and powerful yet under control and willing to submit.

Aristotle observed that the praus person is one who has the virtue that is a midpoint between two extremes with recklessness on one end and cowardice on the other. Praus can be characterized as steady and disciplined courage. It also describes someone who is not overcome by arrogance, anger, or aggression. If we look at it from this perspective, we see that a meek person does not shy away from taking a stand - they most certainly know what they stand for, and that stand is taken at the right time, with the right people, in the right way. To further illustrate this point, consider a few examples from nature: 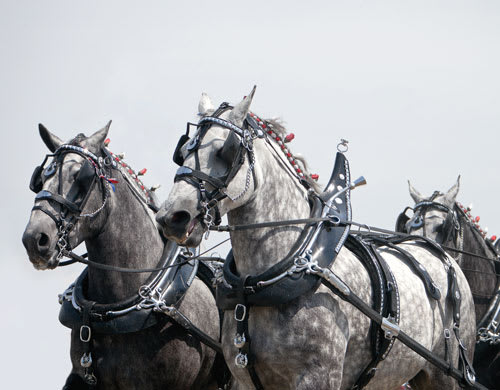 There is a reason engine strength is measured in "horsepower." Horses are tremendously powerful animals, but unless properly trained and brought under control, that strength is largely unusable and wasted. The immense strength of horses has been literally harnessed for centuries to many important uses.

Niagara Falls, which straddles the border between the United States and Canada, is roughly 1,060 feet from bank to bank and 176 feet high. About 150,000 gallons of water flow over the falls every second. For thousands of years, vast amounts of water flowed over the falls with daunting but untapped power. In 1882, the first electric power plant was built on the falls, and power plants in use there today can produce about 4.9 million kilowatts of electricity – enough to power 3.8 million homes. That is power under control.

Over the years, wildfires have burned millions of acres, destroyed property, and led to many untimely deaths. A wildfire is a massive power out of control, and yet, when contained, fire has many positive uses like cooking our food or heating our homes.

What does strength under control look like in a person? First, it is important to note that a meek person is not easily provoked, pretentious or overbearing and they, in fact, readily acknowledge and even celebrate the accomplishments of others. Meekness in action looks like:

The world needs more meek leaders, coaches, politicians, preachers, teachers, doctors, lawyers, and parents. Where does your strength under control fit in the world, or where could it fit? Strength in nature that is not controlled is unusable and even harmful. For our own strength to be useful, we must likewise learn to control it. What is true for horses, waterfalls, and wildfires is true for humans on a personal level. So much good can be accomplished in the world by developing greater meekness! What things might change in your life if you were to develop this awesome attribute more fully? It may be a lofty ideal to aspire to, but human interactions in almost any situation imaginable will be more positive, more influential, and have better outcomes when meekness is involved.